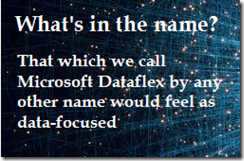 So, CDS is DataFlex now. Actually, it’s important to call it Microsoft Dataflex since there is a separate non-Microsoft product called DataFlex.

It’s the second rebranding of what we used to know as XRM, but it may be the one that will stick for a little longer (I know what you are thinking… but we should have some faith).

To start with, I never really understood what Common Data Service meant. In the last few years, I’ve been on a lot of projects utilizing CDS, but, even when those projects were for the same client, most of the data was unique. There might be some Common Data Model, but that data model would  still would be customized and extended for every project needs. And, besides, what if we take it one step further and look at the data utilized by different clients? We will likely see different models, and we will certainly see different data.

Then why calling it “common” if it’s not that common at all?

That said, I think the intention was to really start building around common data model when CDS/CDM first came out. It’s just not necessarily how things worked out, it seems.

In that sense, XRM might make more sense even today, but XRM has a different flavour to it. It has a lot of “CRM” legacy, and what became of it has very little to do with CRM.

This is why, leaving our personal preferences and attachments aside, neither CDS nor XRM seem to be the right name for this product/service.

Is it different with Microsoft Dataflex? Quite frankly, the main difference seems to be that it does not have any meaning embedded into it except that it’s dealing with the data, and it’s a product from Microsoft. From that standpoint, it could easily be called somehow else, and it would not matter. New services may be added and existing services can be removed, the product may keep shifting its focus, licensing may keep changing, Microsoft may choose to rename Common Data Model to something else… None of that would automatically imply another renaming for Microsoft Dataflex at this point.

Which might actually be great for everyone in the long term.

But, for the time being, it seems we all just got work to do. Updating the slide decks, writing these blog posts, making the clients aware of this new naming, etc. Still, for the reasons I mentioned above, I’m hoping that, once the dust settles, this name will stay for a little longer

2 thoughts on “XRM, CDS, Microsoft Dataflex… What’s in the name?”