While switching between Visual Studio, where I was adding yet another plugin, and Microsoft Flow designer, where I had to tweak a flow earlier this week, I found myself going over another episode of self-assessment which, essentially, was all about trying to answer this question: “why am I using all those different technologies on a single project”?

So, I figured why don’t I  dig into it a little more? For now, let’s not even think about stand-alone Canvas Apps – I am mostly working with model-driven applications, so, if you look at the diagram below, it might be a good enough approximation of how model-driven application development looks like today. Although, you will notice that I did not mention such products as Logic Apps, Azure Functions, Forms Pro, etc. This is because those are not PowerPlatform technologies, and they all fall into the “Custom or Third-Party” boxes on this diagram. 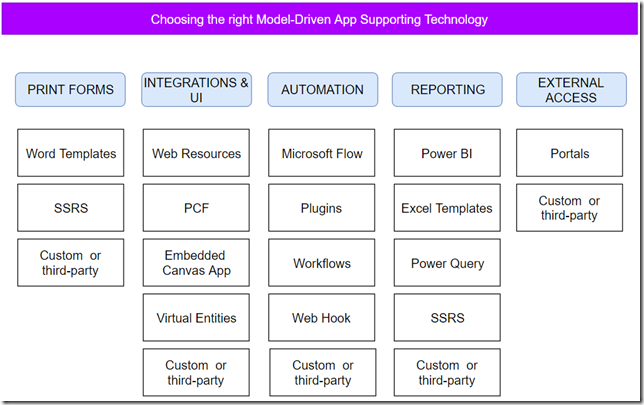 On a high level, we can put all those “supporting technologies” into a few buckets (I used “print forms”, “integrations”, “automation”, “reporting”, “external access” on the diagram above); however, there will usually be a few technologies within each bucket, and, at the moment, I would have a hard time identifying a single technology that would be superior to the others in that same bucket. Maybe with the exception of external access where Power Platform can offer only one solution, which is the Portals. Of course we can always develop something custom, so “custom or third-party” would normally be present in each bucket.

So, just to have an example of how the thinking might go:

I could probably go on and on with this “yes but” pattern – instead, I figured I’d create a few quick comparison tables (one per bucket), so here is what I ended up with – you might find it useful, too.

It seems Word Templates would certainly be better IF we could use unlimited relationships, and, possibly subreports. However, since we can’t, and since, at some point, we will almost inevitably need to add data to the report that can only be tracked through a relationship that’s not trackable in Word Templates, that would, sooner or later, represent a problem. So, even if we start with Word Templates only, at some point we may still end up adding an SSRS report.

Again, when comparing, I tried to make sure that each “technology” has something unique about it. What is “ad-hoc development? Basically, it’s the ability to adjust the script right in the application without having to first compile the typescript and re-deploy the whole thing(which is one of the differences between web resources and PCF).

So, as far as automation goes, Microsoft Flow is the latest and greatest except that it does not support synchronous events. And, of course, you might not like the idea of having custom code, but, quite often, it’s the only efficient way to achieve something. Classic workflows are not quite future-proof keeping in mind that Flow has been slowly replacing them. Web Hooks require urls, so those may have to be updated once the solution has been deployed. And, also, web hooks are a bit special in the sense that they still have to be developed, it’s just that we don’t care about how and where they are developed (as long as they do exist) while on the PowerApps side.

Essentially, SSRS is a very capable tool in many cases, and we don’t need a separate license to use it. However, compatible dev tools are, usually, a few versions behind. Besides, you would need a “developer” to create SSRS reports. None of the other tools are solution-aware yet. Excel templates have limitations on what we can do with the relationships. Power BI requires a separate license. Power Query is  not “integrated” with PowerApps.

This one is really simple since, out-of-the-box, there is nothing to choose from. It’s either the Portals or it has to be something “external”.

So, really, in my example with the plugins and Flows, it’s not that I want to make the project more complicated by utilizing plugins and Flows together. In fact, I’m trying to utilize Flow where possible to avoid “coding”, but, since Flows are always asynchronous, there are situations where they just don’t cover the requirements. And, as you can see from the above tables, it’s pretty much the same situation with everything else. It’s an interesting world we live in