There are at least 3 different connectors we can use with Dynamics CE instances when creating a Flow:

They are not identical, though, and, from what I have gathered so far, we may need to keep a few things in mind when choosing between the 3:

1. When using a CDS connector, make sure your environment has been upgraded

Otherwise, you won’t be able to see your Dynamics CE database from that environment. For example, here is what showed up when I tried creating a flow in the old Default environment which was never upgraded:

And here is what shows up when I’m working with a flow in my Dynamics CE environment:

2. There are rumors that Microsoft has stopped working on the Dynamics 365 Connector

That said, most of the Dynamics 365 connector functionality seems to be available in the CDS connector. Although, there is no “Create or Update” trigger in the CDS connector, and it’s not unusual when we need the same processing to happen in response to either of those events.

If you are using a CDS connector, you may, then, consider starting to use nested flows: 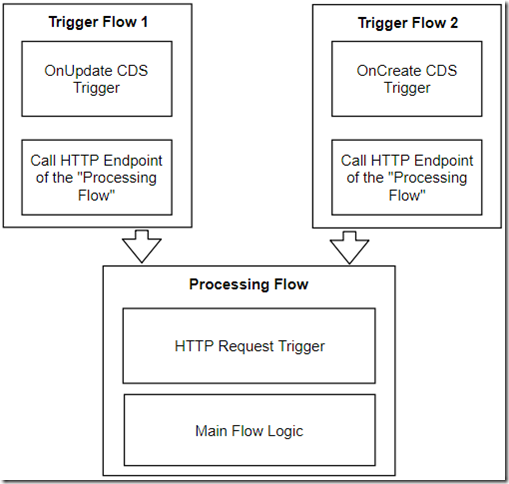 And yes, personally I think that’s quite a complication for somebody used to the native Dynamics workflows. Which is beyond the point, though, since those are different “technologies”.

However, unlike Dynamics connector, CDS connector has “Current” environment option which is why it can be packaged into solutions. You move it to another environment, and it’s still “Current”, so it just works.

Mostly, it seems, we’ll be dealing with these two problems:

But, in return, you’ll be able to do everything(?) that can possibly be done with Web API