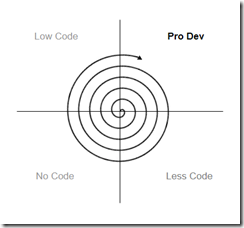 A few years ago, there was a common mantra on pretty much any project I was on:

“Stick to the configuration. There should be no javascripts and/or plugins”

This was happening since quite a few people had run into problems with those low-level customizations in the past. Which is understandable – to start with, you need somebody who can support those customizations moving forward, and, quite often, even plugin source codes would have been lost.

Which did not come without some sacrifices, since, if you think “low code” means “low effort”, it is not, always, the case anymore. Learning the syntax, figuring out various tricks and limitations of those tools takes time. Besides, “low code” is not the same as “no code” – just think about all that json parsing in Power Automate, organizing actions into correct sequences, Writing up canvas app formulas, etc. Yet, it presents other problems – what somebody can do easily with a few lines of code may actually require a few separate actions in Power Automate or a tricky formula in Canvas Apps. Does it save time? Not necessarily. Does it open up “development” to those folks who would not know how to create a javascript/.NET app? For sure.

In the meantime, plugins and custom workflow activities were still lingering there. Those of us not afraid of these monsters kept using them to our advantage, since, for instance, there are situations when you need synchronous server-side logic. Not to mention that it may be faster and easier to write for loop in .NET than to do it in Power Automate. But, it seemed, those technologies were not quite encouraged anymore.

On the client side, we got Business Rules. Which were supposed to become a replacement for various javascript webresources… except that, of course, it did not quite work out. Business Rules designer went through a few iterations and, eventually, got stuck at the point where it’s only usable for simple scenarios.  For example, if I have 20 fields to lock up on the form, I’ll go with javascript vs business rules designer since it would be faster to do and easier to support. For something more simple, though, I might create a business rule.

But then we got PCF components, and, so, the whole “low code” approach was somewhat ditched.

Well, think of it. There are lots of components in the PCF gallery, but none of the clients I know would agree to rely on the open-source code unless that code is, somehow, supported. And, since a lot of those components are released and supported by PCF enthusiasts (rather than by Microsoft partners, for example), there is absolutely no guarantee that support will last.

At least I know I can’t even support my PCF components beyond providing occasional updates. Basically, if there is a bug… and if you discover it once the component is in production… you are on your own.

Which means anyone considering to use PCF components in their environments should assume that a pro-dev person would be required to support such solutions.

PCF is only one example, though. There has been a lot of emphasis on the proper ALM and integration with DevOps in the recent years, and those are topic which are pro-dev by definition.

What else… Custom Connectors? Data providers for Virtual Entities? Azure Functions to support various integrations and/or as extensions for the Apps/Flows? Web resources are still alive since there is no replacement (PCF-s were never meant to replace the web resources), and plugins are still there.

The whole concept of Dynamics CRM/D365/PowerApps development has come a full circle, it seems. From the early days when everything was allowed, all the way through the days when scared clients would insist on not having anything to do with the plugins/javascripts, and back to the point where we actually do need developers to support our solutions.

So, for now, see ya “no code”. I guess we’ll be there again, but, for the time being, we seem to be very much on the opposite side.