I like how Microsoft keeps introducing changes to the Power Apps licensing – it’s good to see prices going down, API limits going up, and new licensing options being introduced in addition to the existing ones.

So, what’s the story with that new “pay as you go” plan? 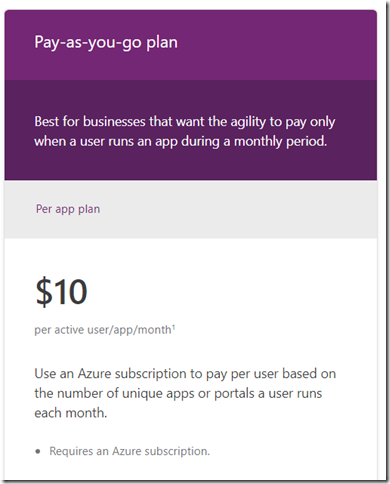 It’s an interesting addition to the plans, but the key to understand is that it’s not, really, “resource consumption” billing. As in, when you are using other Azure services, you are billed for CPU/memory/requests/etc. With the “pay as you go” Power Apps plan, you are billed when a user opens an app, and you are billed as if that user were using the app for the whole month:

(Have a look at https://docs.microsoft.com/en-us/power-platform/admin/pay-as-you-go-meters?tabs=image for more details)

In other words, the way I understand it, this might work for the users who would be using a single app every second or third months. Because, if those users were going to keep using the app monthly, it would be better to give them an app pass ($5 per licence).

Or, if such users were going to use at least 2 apps monthly, it would be better to give them a user licence ($20).

If it were hourly or daily billing, I guess it would have been different, but, since the billing is monthly, the benefits are somewhat limited, it seems. You really do need to have a usage pattern where your users are not going to be coming back to the environment to use that single app every month, and I would not be too sure how to do that, given that it’s exactly that unpredictability which is supposed to be addressed by utilizing “pay as you go” plans.

And this is where, if Microsoft were to introduce a real consumption model, it seems that would be much more useful. As in, what if we could pay for the CPU usage, storage, and traffic? I’d think since Power Platform is built on top of Azure, there should be a way…  There would be no need for the API limits, no need for the monthly billing, etc. That is probably the future anyways, but, right now, we have a new plan available, so let’s see if and when it’s going to be beneficial to the clients.