Social distancing has definitely took a toll on my blogging – it’s been a while since the last post. Although, I’ve actually learned quite a few things outside of PowerPlatform in the last month, so I could probably start blogging about a few other things now:

However, Power Platform  has, finally, caught up with me when a co-worker showed me how filtering in model-driven apps works differently now. I think I like it. Although, the reason it came up in the first place is that the users were complaining. Well, at least it’s not on us that this change has happened

But what exactly is different now?

Basically, there are 3 changes.

There is a drop down there which combines “sort” and “filter” options. It’s not enough to click on the column header now to get the grid sorted – we need to open the drop down and choose a sorting option.

Note: you can still hold “Shift” button to sort on more than one column

When using the Filter by, you can choose a filter: 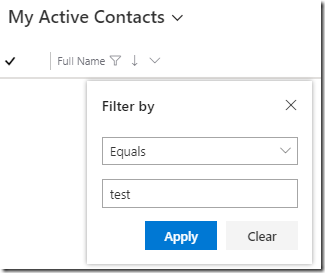 Which, for a lookup field, will give you a lookup popup:

And, for an optionset, will allow you to check off multiple options: 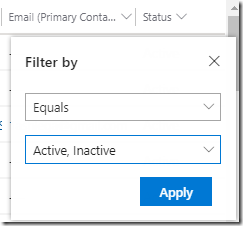 3. And this all brings us to the “Advanced Filter”

Which sounds strangely familiar, but it’s not the same as “Advanced Find”.

The query builder interface there, even though it seems to be very similar to what it looks like in the advanced find, is somewhat different. And, unlike the advanced find, it actually does pick up on all those individual column filters which I have set up in the “current session”

Which, in general, seems to be working quite well. Although, would not it be great if I could also save that query as a personal view? It seems I can’t, yet.

This is all part of the release wave 1, and, if we were paying more attention, we could have given the client a bit of an advance warning. It does not seem to be that disruptive, though, except for the sorting which now requires two clicks instead of one.

And the only other thing I have not mentioned yet is that, once using “Advanced Filter”, you’ll see those additional indicators that an advanced filter has been applied:

For some reason, those indicators won’t be showing up when using a column filter, so just keep that in mind when troubleshooting with the users

One thought on “Updated filtering in Model-Driven Apps/Dynamics”