This post is a proof of concept for the following scenario: 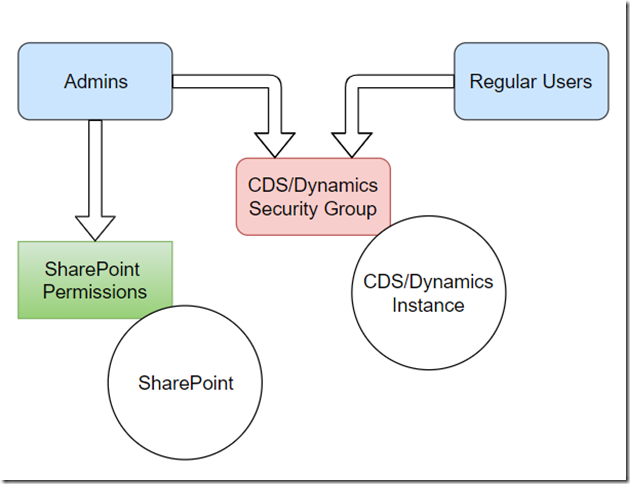 Would not it be nice if we could use more than one security group so that, for example, we would have admins in one group and all the other users in another. This way, we might add that admin group to Sharepoint so admin users would become site owners/site collection admins there.

Unfortunately, nested security groups are not supported for CDS/Dynamics:

Do we have any options? Well, just continuing on the PowerShell exploration path that I started earlier this month, we could use this kind of script to emulate nested groups:

What the script above would do is:

– It would connect to Azure AD

– The script will, then, loop over all of those groups and do a couple of things for each of those:

As a result, I can have security groups configured exactly the way it’s shown on the diagram above since I’m not limited to having just one group anymore.

Of course it’s PowerShell, so the script has to be started somehow. It might be doable with Azure Runbooks – for example, this script could be scheduled to run a few times per day to do the automated sync. Although, it will have to be updated so it does not ask for the credentials. Which should be doable with Get-AutomationConnection

Yet the script can likely be improved so it does not remove users which will be re-added eventually. This is to avoid possible glitches when a user loses access to CDS/Dynamics for a moment while that user is being re-added.