Before I continue, I just wanted to show you something: 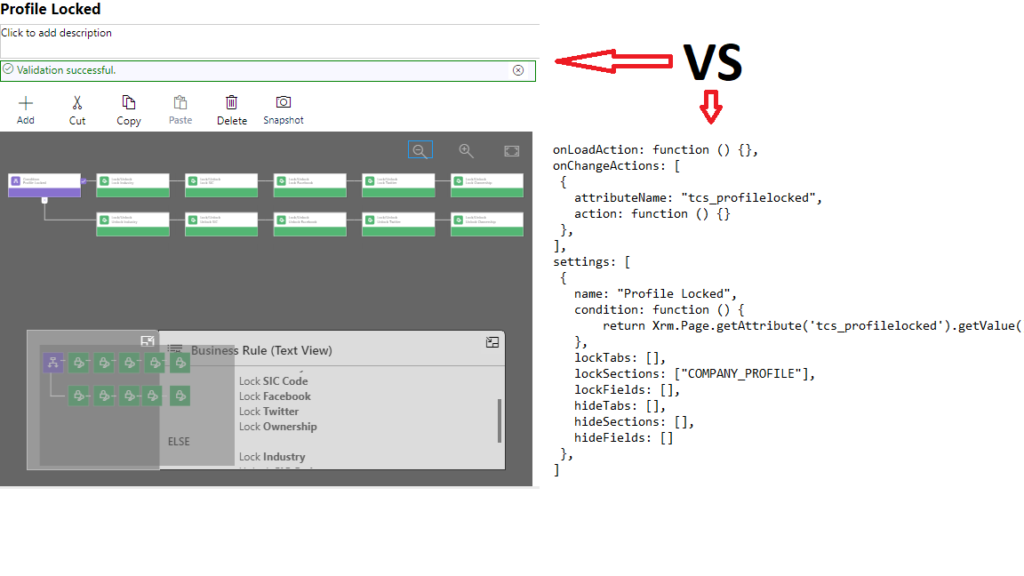 On the left side is what you would have to do if you wanted to hide all the fields in the company profile section on the out of the box Account form. There are only 5 fields there; however, when using a business rule, you have to do lock/unlock, so you have to add two actions per field to the business rule. This kind of business rule will quickly become rather complicated if the number of fields turns 10.. or 15.. or 20.

On the right site is what a javascript solution can do to simplify that business rule. And there is another advantage to it: you don’t even need to update the script once it’s created – in that particular example, it will be operating on the section level, so you can keep adding/removing fields to/from the section, and the script will be picking them up automatically.

I think it’s one of the improvements we will see in the out of the box business rules sooner or later, but, for now.. there are TCS Tools🙂

Here is how it works:

2. Create a web resource for the following script

3. Add that new web resource to the form as well

InitializeFormSupport will be the function name for that event handler

From here, you can focus on the configuration of the rules – all the preparations have been done.

So, now, you just need to add onChange actions and, also, settings.

Every action has two elements:

Every setting has the following elements:

Here is an example for the company profile rule mentioned at the beginning of this post:

I will explain the internal workings of this solution in the next post.. Continue reading