There seems to be new mapping behavior in my environment as of this morning – it could be a feature, but it could also be a bug. But it’s something to be aware of.

Notice how, when creating a new record to populate a lookup, I’m getting one of the fields (“Feature Book”) populated automatically:

This is normally supposed to happen on the 1:N relationships (so, basically, in the subgrids) where we can define mappings. And I have that mapping defined in my test solution, but that’s a different relationship:

In case with the lookup above (which is N:1), I could still define the mapping, but it would be from Author to Book: 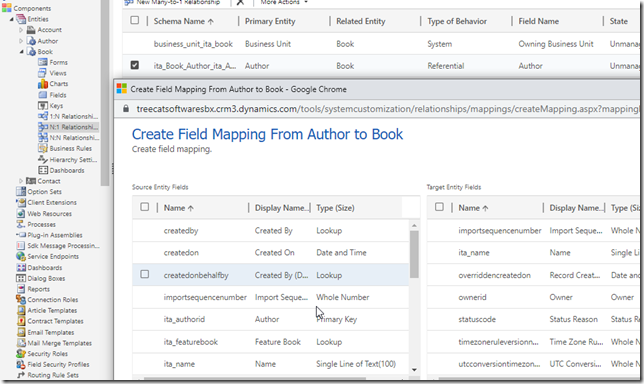 So, apparently, since I have sort of a “circular” relationship between those two tables, the system is picking up on the “reverse” relationship mapping when I’m populating the lookup.

Now that’s interesting, and could be useful, but, it seems, I just can’t differentiate, anymore, between adding a record from the lookup and adding it from the subgrid (so can’t say, easily, if the record being created is on the “N” side of the relationship, or if it’s on the “1” side).