You have probably heard that Entities are Tables now? If not, have a look here: 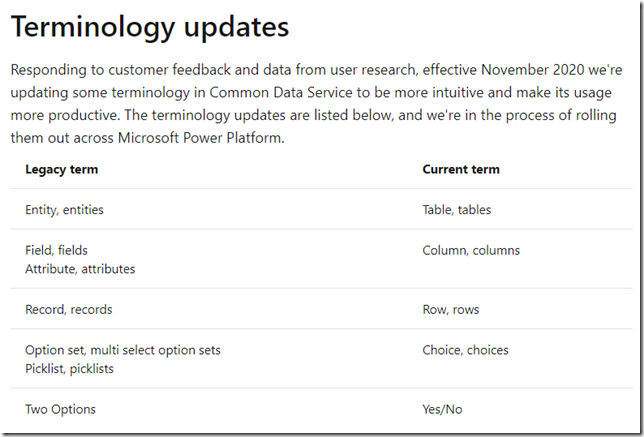 Quite frankly, we should all get used, by now, to all those changes in the product names and/or in the terminology around Microsoft products. Sometimes, those changes are successful, and, sometimes, they are not. One thing is certain – they did happen in the past, they keep happening, and they will be happening in the future.

And I just think I reached the point where it does not matter to me what the name is, since:

For example, in case with entities and tables, we’ve all got used to “entities” over the years. But the concept is rather vague to be honest. It’s not a table, it’s not a view… it’s some combination of metadata and business logic.

It is vague to the point where even XRM SDK has it wrong. There is “Entity” class in the SDK, but, realistically, it should have been called EntityInstance. Or, maybe, EntityRecord. Or even just “Instance”.

If it’s easier to call it Table when discussing these concepts with new clients/developers, so be it. Although, of course, in this new terminology we will likely always have to add “well, it’s not quite the same table you’d have in SQL. But it’s a good enough approximation”

In that sense, it seems I almost became immune to the renaming virus. I know it’s there, but I’m staying cool.

Although, on a more personal level, this change may affect me, and not in the best way.

See, half a year later, when new terminology settles in, everyone will be searching for “CDS tables…” in google. But all my blog posts up until now used different terminology, so there will be two immediate consequences:

Almost inevitably, there will be  some period of adjustment, when old and new terminology will have to co-exist, and, yet, every Power Platform user/client/developer would have to be familiar with both sets of names to be able to understand older posts/articles/blogs/or recordings.

From that perspective, it might be quite a conundrum, of course. Although, everyone is going to be in this boat, so we might, as well, simply keep sailing – just need to adopt new terminology and start using it moving forward.

2 thoughts on “Entities are Tables now, so what?”