That’s quite a few steps not to mention that the file itself looks rather complex if you’ve never seen it before. For example, there are over 11000 lines in the customizations.xml for the TCS Tools solution: 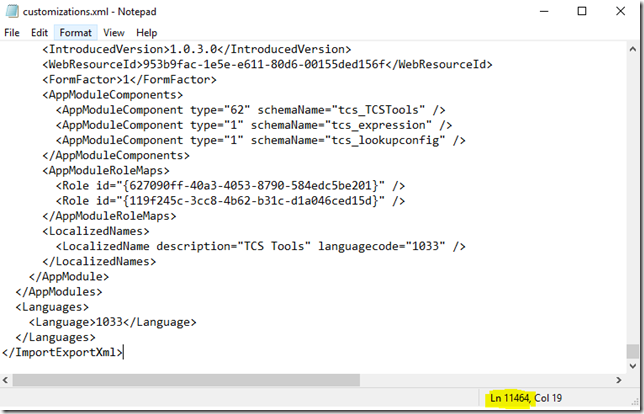 So, manually updating that file must be unsupported, right? After all, we are supposed to configure Dynamics using the “customizations” interface. That’s what I used to be thinking (but that’s not to say that I would never update customizations.xml manually, though. Even if I felt somewhat guilty every time I’d be doing that). And that’s until I ran into this article just a few days ago:

When to edit the customizations file

Actually, if you look at those 4 items, it kind of makes sense.

There are no SDK methods which you can use to update the Ribbon, yet you cannot do much about the Ribbon in the user interface. Of course there is Ribbon Workbench, but what it’s actually doing exactly that – it’s updating customizations.xml.

There are no SDK methods which would allow us to update FormXml either. More exactly, we can use SDK to update form records.. but we still have to use XML there. Or, alternatively, we can update customizations.xml, package the solution, and import it to Dynamics.

As for the save queries, that’s, probably, even more interesting. When building those queries in the user interface, we have to accept some limitations such as:

However, since FetchXml has support for all those feature (and it’s only a user-interface limitation that we can’t use them), we can still update those queries directly in the customizations.xml and import those changes to Dynamics.

This is not necessarily a game-changer, but it definitely makes me feel better keeping in mind that there is, probably, not a single Dynamics implementation where I would not make at least one of those changes in the customizations.xml (even if only to add a ribbon button using Ribbon Workbench)